AIED was founded on 10 October 1953 by a group of worldly journalists and scientists, of varied political orientations, who had beliefs founded on democratic, non-religious inspiration.

They set out various objectives for the Association:

Based on its own By-Laws, AIED does not have a commercial scope and is a non-profit organization. In the pursuit of realizing its corporate objectives, the organization is committed to avoiding racial religious, social and political discrimination. AIED operates through its national corporate bodies (National Congress, National Board of Directors, National Chairman, National Executive Body) and its Sections. Acts in collaboration with other associations, committees, public and private entities, both Italian and foreign, whose aims do not contrast with those of AIED. 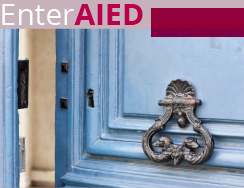